Hydrofluorocarbons, better known as HFCs, are chemicals that are mainly used as refrigerants. R-22 is a common HCFC refrigerant that is often used in air-conditioning equipment. Designed as an alternative to the now-banned Chlorofluorocarbons (CFCs), the chemicals have begun being phased out by environmentally-conscious organizations through HFC regulations.

Human-made CFCs were initially used due to their practicality in common-use items like refrigeration, aerosol cans, and more — but it was eventually discovered that they’re a massive contributor to ozone depletion. According to The Conversation, CFCs contribute to ozone layer destruction due to its stability. With their lasting shelf-life, they disintegrate under sunlight, thus warming the atmosphere and depleting the ozone layer in the process.

HFCs were then sought out as a replacement to CFCs — that is until it was revealed they also endanger the environment in similar fashion. Here’s what you need to know about HFC regulations and their eventual phase-out. 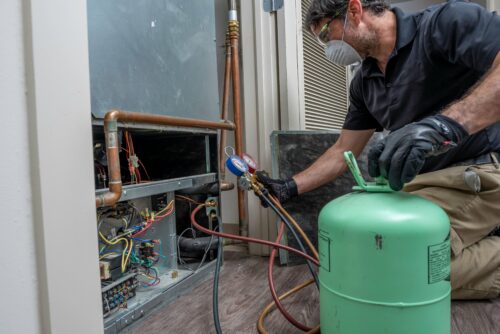 December 2020, the American Innovation and Manufacturing (AIM) Act seeks to phase out HFCs while also “maximizing reclamation and minimizing releases from equipment, and facilitating the transition to next-generation technologies through sector-based restrictions,” according to the Environmental Protection Agency (EPA).

While the AIM Act functions on a national level, states have begun taking individualized approaches to HFC regulations.

In 2021, the Department of Environmental Conservation (DEC) adopted 6 NYCRR Part 494, Hydrofluorocarbon Standards and Reporting in New York. The HFC regulations see prohibitions placed on the chemicals in end-use cases, and per the DEC, “include the sale, installation, and commercial use of certain refrigerants in new or retrofitted food refrigeration equipment, large air-conditioning equipment (or chillers), and vending machines as well as prohibitions on substances used in foams and as aerosol propellants in new consumer products.”

494 essentially targets HFCs and other refrigerants that have high Global Warming Potential (GWP) — replicating the respective purposes of Significant New Alternatives Policy (SNAP) Rules 20 and 21. It should be noted that 494 is not retroactive, as only refrigeration equipment that requires replacement or retrofitting fall under the legislation’s rule. Currently functioning refrigeration equipment is not affected.

HFC regulations have become more commonplace in the 2010s going into the 2020s. As of this writing, state governments have begun cracking down on the use of HFCs in refrigerators, foams, chillers, and in supermarkets.

As previously discussed, HFCs were introduced to combat the shortcomings of CFCs before the realization that they also contribute to ozone depletion. But how exactly?

Like CFCs, HFCs also destroy the stratosphere, which helps protect the earth from Ultraviolet B (UV-B) rays. Per the Minnesota Pollution Control Agency, destruction of the stratosphere can be injurious to humans and the earth, as it can cause “increased incidence of skin cancer and cataracts, immune system damage, damage to terrestrial and aquatic plant life, [and] increased formation of ground-level ozone (smog).”[bookly-cancellation-confirmation]

As it is a greenhouse gas, HFCs carry a high GWP. The NRDC notes that HFCs’ “global warming potential (GWP) is thousands of times that of carbon dioxide,” meaning that “emitting a kilogram of an HFC contributes to climate change as much as a ton or more of carbon dioxide.”

Alternatives to HFCs and the Rise of A2L Refrigerants

With HFC regulations and its inevitable phase-out, organizations have begun resorting to different alternatives — mainly A2L refrigerants. ACHR News notes that A2L refrigerants are mildly flammable and are generally of low toxicity.

Adhering to HFC Regulations with Donnelly

Per the EPA, HFCs are being phased out due to the damage it causes to the ozone layer, which protects us from the sun’s harmful ultraviolet rays. HFCs are commonly found in air conditioners, which potentially means your building’s HVAC system may be contributing to environmental damage.

Donnelly Mechanical, however, can modernize your HVAC system, so that you can better protect the environment and remain compliant with the ever-changing legislature surrounding the issue. Determining if it makes sense to for a coolant conversion or an equipment upgrade is the first step.

To learn more about how Donnelly can help your business, please visit our website and get in touch with us today!

Get in Touch
X

Give Us a Call

We use cookies to ensure that we give you the best experience on our website. If you continue to use this site we will assume that you are happy with it.Accept