They start working after everyone else has gone home for the night or called it a weekend, and the jobs are not pretty.

The heating and cooling units are bulky and sensitive, sometimes weigh tons, and probably will be installed in a tight space with bad lighting. Doors and windows often need to be removed to get them in place. 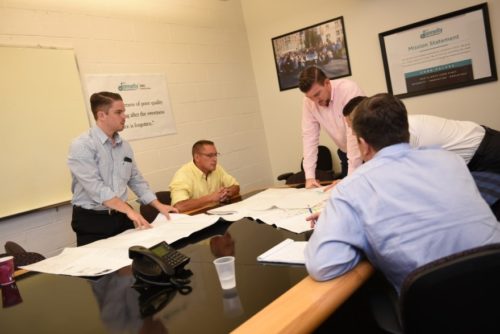 It likely won’t be just one unit, either, not when the building is in the concrete canyons of Manhattan with dozens of floors. Oh and when it’s done, they take away the old units and make sure there’s as little trace as possible that any work has been done. That means someone should polish the floors, too.

Such is the life of an HVAC contractor, and the installations are only half the battle, says Donnelly Mechanical Corp.Vice President Thomas Cahill.

“What it really comes down to is how you respond to your client and how you follow through on your commitments,” Cahill says.

A 30-year-old company which was recently bought by Houston-based ENGIE North America, Donnelly’s employees work inside, outside and above some of Manhattan’s most expensive real estate in a business where margins are tight and selling value over price to a demanding owner or property manager is tough when there are plenty of contractors to do the job.

Staying cool in a heated industry 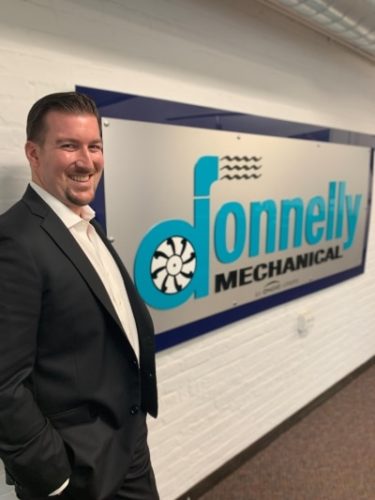 Donnelly specializes in working in Class A office spaces throughout Manhattan, with clients who reside in properties owned or managed by firms such as Rudin Bros., Boston Properties and Vornado.

Cahill speaks quickly and in the cadence of construction, but makes it clear he’s only a cog in the success Donnelly has had over the decades. In fact, he’s a relative newbie after almost three years there; most employees have clocked 10 years or more.

“We are successful because everybody at the company acts as a salesperson; everybody has the mindset that we are here to serve our customers and promote growth,” he says.

Then there’s the whole willingness to work odd hours, such as a recent project at a 36-story office building owned by Equity Office Properties. It was here that Donnelly installed new air handling units on every floor, usually three per phase. The work began at 6 p.m., and ran past midnight, with installers facing a hard deadline before new tenants arrived.

The installers know what they are doing, both in the labor and how their work affects building tenants.

“We feel the pain too, because in most of these buildings, all the tenants are going to complain if their operations are disturbed, and rightfully so,” Cahill says. “So we try to be very sympathetic and responsive to both our clients and those around them.”

But at least the Equity Office Properties building project was indoors. In the autumn, Donnelly gears up for jobs that are truly tested by the elements.

“For an exterior cooling tower replacement, the bid is usually awarded in the fall,” Cahill says. “And you have to do the work in the dead of winter because the customer wants it running by April 1. Our employees are on the roof, 55 stories up in the dead of winter, and it gets pretty cold up there.”

These are not units that can be simply loaded into a service elevator for a ride to the roof, either. Whole units are hoisted by cranes when possible, but Big Apple traffic demands can make permits for street closures tough to get.

If a crane is not practical or possible, Donnelly reverts to piece work.

“We are working with 10,000 or 15,000-pound units and we break them down to the nuts and bolts and reconstruct them where they will be installed,” Cahill says.

Donnelly is a union shop, one which is routinely hiring and then promoting from within, but that source of pride can still make bidding more difficult in an environment where customers may not always see the value added to a higher bottom line estimate.

“You have to hope your talent makes your money back,” Cahill says. “We are constantly evaluating and developing our workforce to ensure our quality is maintained.”

To continue to build value for its customers Donnelly is also specializing in “single source turn-key solutions” where it takes on large and small jobs from estimating through maintenance. In addition to the off hours employees work for installations and repairs, the company provides preventative maintenance, duct cleaning, air quality testing, and converting systems that use the R-22 coolant, which is being phased out by 2020 on order of the U.S. Environmental Protection Agency. 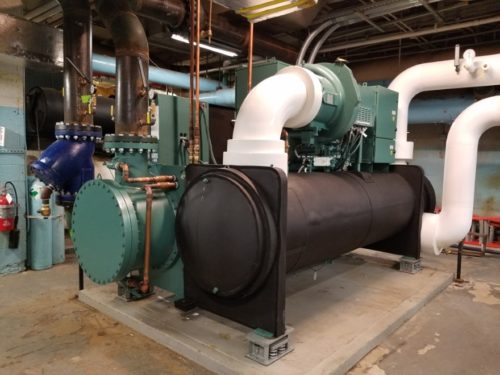 The company does about 300 jobs annually and maintains 2,000 client accounts, he says, and although it is never easy to turn away work, it currently is a pace that allows them to do jobs well.

In August 2018, ENGIE completed its purchase of Donnelly Mechanical, a move welcomed by Cahill and the rest of the company, he says.

“We are very proud to be part of ENGIE, this is going to help us continue to grow in the ever-changing markets we see for mechanical contracting services,” Cahill says.

Though Cahill, 35, has extensive experience in project management and worked as an electrician between semesters while attending St. Joseph’s College, his career plan was to join his father at the pharmaceutical company he worked in after Cahill earned his bachelor’s in business administration and management.

Instead Cahill joined another leading mechanical contractor in New York City, staying for more than 11 years before joining Donnelly as a director of special projects. The special projects division has now merged with Donnelly’s regular operations, he says, all part of ensuring the company stays responsive and close to its customers.

Away from the job, Cahill, his wife and three children enjoy spending time in upstate New York where they can escape the big city to ride snowmobiles, ATVs and go fishing. He is also an avid golfer, and enjoys playing rounds with clients.

Yet even in his leisure time, Cahill says he, like the rest of the company, is ready to answer a customer’s calls.

“You have to approach every opportunity with a hunger,” Cahill says. “It’s very easy to become numb to a problem in this business, but if you approach it like a whole new opportunity, it can open up new doors.”